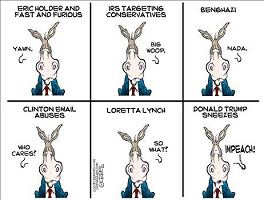 It seems the press and by influence a number of other people who listen to the press are suffering from the same disability that affected so many democrats during the Bush presidency, “Bush derangement syndrome”. This time, however, it seems to be affecting some republicans as well as democrats. Whenever or whatever Trump does it must be sinister or must be wrong simply because Trump said it or believes or acts on it, this is how the left discusses it whether or not they believe it. According to the left the move on Syria just shows how Trump is changing his mind – flip flopping as it were, a sure sign he is unstable and can’t keep his word since he wasn’t going to invade another country and on it goes. An unbelievable comment was made on Media Buzz this morning that seems to really illustrate the impact of an individual’s bias when a series of events or a single event doesn’t go the way someone wants it. It’s almost as if the “McDonalds Generation” (you deserve a break today – remember that commercial?) grew up, had kids and taught them they deserve everything (whether they earned it or not). When I listen to the democrats lament how Hillary was robbed of her rightful position or Trump is an illegitimate president I can’t help but think these people have never faced disappointment, they’ve always received a “participation award” whether they were dead last or first in any competition. So back to the comment on Media Buzz. The young woman commentator was mocking Trump for saying on the campaign trail that his administration, unlike the Obama administration, would be the most open and transparent administration to occupy the White House. Why was she mocking him? Well it turns out no one outside the military, intelligence department and a few people in the White House knew about the planned Syria strike. She seemed to be saying clearly no one in the press was informed ahead of time and if the press was not informed then without a doubt Trump was “flip-flopping” on his promise to be open and transparent. This is an unbelievably childish, self-centered point of view on 2 fronts. Both reflect how someone’s bias can affect their view of the world. If the bias is “Trump is the illegitimate President” then it’s simple to see the attack on Syria as a lack of transparency. If your bias is “Trump was legally elected the presidency by the established procedures” then it’s easy to remember that he made numerous claims that he would not telegraph his military plans ahead of time, which is the first point. The second front is simply if he were to include the press ahead of time they would broadcast it as quickly as possible allowing the recipients of the actions time to prepare and minimize the impact of the action thus rendering it neutered and a giant waste of ~$120 mm. An interesting point to this came up later in the day as correspondent Jennifer Griffin was relating her experience while preparing to report on another subject concerning Syria she voluntarily suspended her report so as not to prematurely expose the operations underway. This shows a level of integrity not found in many of the active correspondents today. Jennifer checked her bias “at the door” because apparently she understood the ramifications of the operation. Even though Jennifer was the correspondent assigned to Hillary Clinton’s campaign she always seemed to report on the facts as they occurred not as she wanted them to occur or interpreted as she wanted everyone else to see them. I suspect she had wanted to see Hillary elected but there is no direct evidence of this because she approaches her job w/ a higher level of professionalism than 90% of the correspondents I have read or listened to. She actually puts Ted Koppel, Dan Rather, Mike Wallace, Tom Brokaw, Peter Jennings & the rest of the iconic anchors to shame. So even if the Trump Admin wasn’t transparent (as was the case for the last 8 years) any intelligent thinking person would recognize that strong decisive actions like this magnifies Trump’s negotiation power by an order of magnitude not to mention he actually destroyed a significant amount of the chemical weapons that were supposed to be eliminated through Obama’s and John Kerry’s negotiating skills. Trump is introducing the American public and particularly the establishment pundits and press to a new form of leadership. I think Jennifer Griffin gets this. I’m not sure you can really call Mr Trump a politician, especially if you define politician by the Bush, Reid, Clinton or Obama or any of a number of other such character’s way of dealing with problems. For the first time in at least 2 decades, maybe longer, we have someone who’s action is not directly tied to getting themselves re-elected. Trump actually seems concerned at 1) doing what he said he would do, 2) moving to an economically sound system not tied to any ideology and 3) shifting directions or positions as necessary to achieve an intended outcome regardless if it is perceived as any form of ideology. From my perspective Trump is running the country as I have seen some of the better companies operate, namely hire the best people you can in their respective field of expertise. Follow through with each project, never leave it half done. If the state department had bothered to confirm Syria’s chemical weapons supply had actually been destroyed instead of assuming they would be voluntarily following through with a promise to destroy the weapons then how many of those people gassed to death would still be alive today? In business the people responsible would have been labelled lazy and likely would have been given the opportunity to better themselves someplace else.